This week was a good week with loads of progress. I’ll just go through each item one by one, as usual.

Last Friday I opened the pull request to merge the MouseMap widget. After a bit of a discussion around preferences, my mentor and I decided to merge ongoing work in a rewrite branch. This keeps the master branch functional (while still receiving improvements, such as adding new functionality to the ratbagd bindings or a Gtk.Application subclass), but it also prevents reviewing the same pieces of code over and over until they finally end up in master.

With the MouseMap finally done, it was time to get started on the real work: implementing the mockups!

GtkBuilder templates allow you to define your composite (composed of other widgets) widget through .ui files, which are XML files generated by Glade. This is nice in that it removes all the boilerplate code that creates widgets, sets their properties and connects their signals. Instead, you:

Nice right? Well, not for Python. That is, not officially: pygi_composite_templates is prototype implementation of Gtk+ composite widget templates for PyGI. In an experiment I’ve tried how this works for Piper, and fortunately I haven’t noticed any issues yet! Thanks to templates the UI code is now significantly cleaner and easier to comprehend, not to mention there is much less of it as well.

There was only one issue with gi_composite when I tried it: it wouldn’t find Piper’s .ui file, even though it was declared in piper.gresource.xml which gets added to Gio’s resources. I contacted Dustin, gi_composite’s author, who kindly responded:

One thing you might try is ensuring that your resource is registered before your ui class type is created – note that I said type, not instance. If I recall correctly, I think the ui file may be needed when the class type is created… which is when the interpreter executes the line with ‘class Foo’ on it.

And indeed, shuffling some lines around so that the resource gets added before anything else does the trick! The complete implementation of this can be found in this commit.

The UI elements are all defined in .ui files, keeping the code blissfully clean (trust me *Star Wars wave*). In fact, the complete Python code weighs in at just around 200 lines. So, what does it do? Well, this:

In case committing the changes to the device doesn’t succeed, there’s also an in-app notification that informs the user as such: 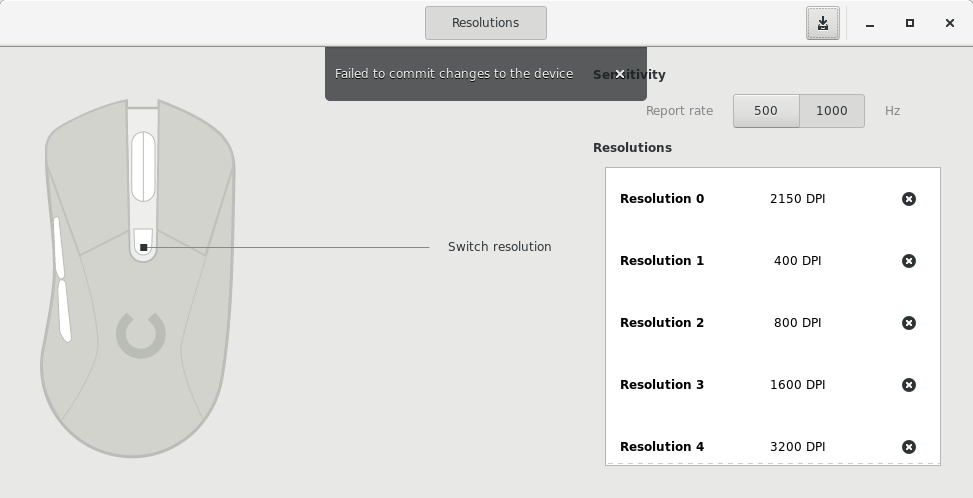 Obstacle 1: no support for adding or removing resolutions

According to the mockups, Piper should be able to add and remove (or enable and disable, if the device doesn’t support this) resolutions. It turns out, however, that this isn’t yet supported by libratbag. The buttons are there, and until this is supported they will just print a message to stdout.

While working on the above changes, I noticed that any changes made were not saved on my device. Then I remembered that libratbag has a commit-style API: any changes made are not stored on the device unless explicitly committed. Ratbagd, however, didn’t expose this method yet, so I had to add it.

The ratbagd PR is here, and the Piper bindings commit is here.

Once the commit method had been added everywhere, my changes still weren’t saved on the device (sidenote: I did find this bug). Benjamin helped me in figuring out why; it turned out that ratbagd unconditionally used the ratbag_resolution_set_dpi_xy method, which is meant for devices that support separate x- and y-resolutions, which my device doesn’t. Benjamin fixed this, and I added support for libratbag’s error codes to Piper’s ratbagd bindings such that these cases are noticed in the future (yes, this and the commit method were solved simultaneously).

Obstacle 4: does every resolution have its own report rate?

Obstacle 5: drawing only leaders that have children

Before this week, the MouseMap unconditionally drew all the leaders in the SVG. The resolutions page needs to indicate which button(s) is (are) assigned to switch resolutions, so it adds less children than there are buttons on the device (unless every button is assigned to switch resolutions…). To draw only leaders that have children, the paths and their origin square in the SVG are grouped and this group is given the identifier buttonX-path (or ledX-path), and the MouseMap’s _draw_device method is adjusted:

Finally, to find buttons that are assigned to switch resolutions:

Obstacle 6: keep scrolling the list when the cursor hovers a scale

As you can see in the video, the list contains scales (sliders). If, when scrolling the list, the cursor hovers a scale, the scale would consume the scroll event. Not nice. To work around this, we capture the scroll event and block the signal on the scale:

Obstacle 7: adjusting the scale in multiples of 50 DPI

Most mice only support a resolution in multiples of 50 DPI; anything less than that doesn’t make much sense. The Gtk.Scale wouldn’t adhere to its Gtk.Adjustment’s step-increment property, even though it was set. Weirdly, it does adhere to the page-increment property. After asking around on #gtk+, I ended up connecting to the change-value signal, which is emitted when a scroll action is performed on a range (a scroll action can be anything, really). The signal handler receives the new value, which we can round to the nearest multiple of 50 before setting it on the scale:

This week ratbagd got support for different SVG themes. The reasoning behind this is that Piper, an application intended to integrate with the GNOME Desktop Environment, prefers a different style of SVGs than a hypothetical KDE version (Kiper? 😉) would.

There was a long lasting PR open on libratbag to convert all SVGs to the toned down style as preferred by Piper (together with issues 178 and 171). This PR was rebased on top of the theme changes, after moving the default SVGs to their theme directory, which probably wasn’t done in the theme PR as an oversight.

The GNOME theme currently sports three device SVGs. If you are familiar with Inkscape and willing to do a few; feel free! Here is the list of devices that aren’t yet found in the GNOME theme.

Today I quickly added theme support to Piper’s ratbagd bindings, so that the MouseMap can be adjusted and everything will work with the new libratbag master.

The changes required to the MouseMap are rather straightforward:

That was it for this week! You can find the complete resolutions page PR here. Hopefully it will be merged early next week, so that I can start on the next page.

This blog post is part of a series. You can read the next part about the LED stack page here or the previous part here.