This week Piper saw some progress again! Today I opened the pull request for the MouseMap that I’ve been working on for the past two and a half weeks now. I’ll discuss the changes made since the last blog later; first, I want to highlight the other work I did the past week.

A major milestone this week is the merging of ratbagd and libratbag. While Piper shouldn’t notice any of this (it talks to ratbagd over DBus), it’s still a highlight I want to mention. I also passed for the first evaluation, so I can keep working ☺.

libratbag has supported configuring LEDs for a while now, but this hadn’t been implemented in ratbagd yet. Piper will need the implementation in ratbagd in order to expose the settings to the user, so last week I sat down to add the missing code in ratbagd. You can see the resulting PR here.

Since Piper now manages its own ratbagd bindings (they really are just DBus wrappers), I added support for the newly exposed DBus interface straight away. This was merged today.

Last week, my mentor exposed a device’s minimum and maximum resolution through libratbag and ratbagd. Today I quickly implemented this in Piper’s ratbagd bindings, as well.

Adhering to PEP8 in Piper

Adhering to a certain style is good. It makes your code consistent, which helps when reading it. Since code is read more often than it is written, this is a good thing.

The most used convention in Python is PEP8. From this week forward, Piper adheres to PEP8. We’re using flake8 to check this. Personally I use flake8’s Git hook, but we now also have a CircleCI build running for every PR to run flake8. In the future, this will probably also be used to run unit tests.

Adding the finishing touches to the MouseMap

The most obvious change is that the MouseMap now also works with left-aligned children: 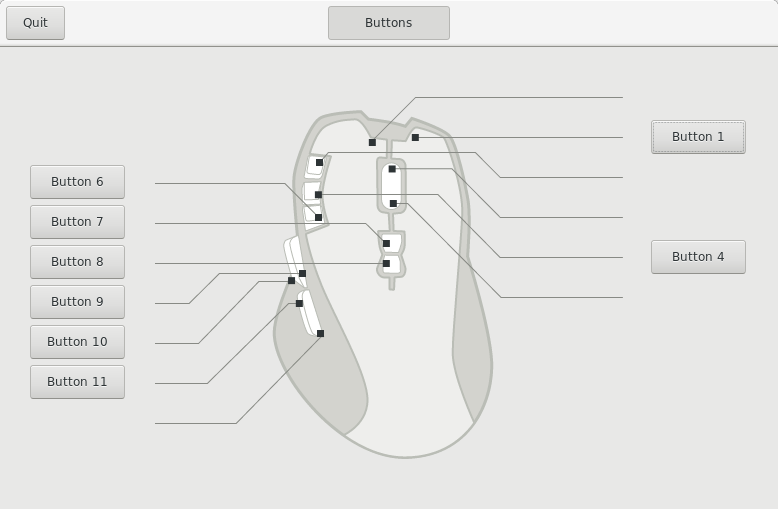 Detecting where a widget should be aligned is rather straightforward, but it took a while to get to where we are now. At first, the leaders ended with a 1×1 pixel whose x-coordinate I queried. Coordinates with a value of zero would be left aligned, and others right aligned. My mentor rightfully thought that this wasn’t a nice approach, because there is no meaning to this random value. He suggested I talk with bentiss (Benjamin), who also had to lay out buttons around an SVG for GNOME’s settings daemon. Benjamin suggested that we add back labels into the SVG, who would be right-aligned on the left side and left-aligned on the right side (savvy? 😉). This worked, but 1) it required that the drawn widgets are large enough to completely cover the labels and 2) it messed up the calculation of the width, as there was no way to determine how much the widget would overlap on the SVG. The solution here was to remove the labels from the XML tree before opening a librsvg handle, but now there were no labels left whose coordinates to check… Of course, we could parse those ahead of time and remember all the coordinates, but we don’t have the element identifiers until the widgets are added to the container and by this time the handle is already instantiated.

So, after a quick discussion, we settled somewhere in the middle of both approaches. We again have all leaders end with a 1×1 pixel, but we don’t check these pixels' x-coordinates. Instead, they have a style attribute that we query for (at the moment, this is the text-align attribute, but this may change in the future). The code now looks like this:

As you can see, we use XPath to query the XML tree for style attributes. It’s implemented like this:

The attentive reader may have noticed the _MouseMapChild class. This is an implementation detail (hence it is private) to capture all data related to children:

To calculate the preferred width with left and right aligned children, we simply iterate over the children and take for each side the maximum width:

Because we cannot reliably calculate whether children are positioned above or below the SVG (the SVG elements may have arbitrary coordinates), we simply assume that the SVG is tall enough to fit all children (which works because we have control over the SVGs):

Finally, the coordinate system is now centric to the SVG with its origin to the top left of the SVG such that the MouseMap will be drawn in the center of its allocated width (this also shows how the highlighting is now done using masks, as discussed in the previous blog entry):

All this work leads to the below video. You can find the pull request here.

In progress: reimplementing Piper according to the new mockups

As you can see from the video, I have started with a rough implementation of the new window:

Next week I will attempt to implement the resolutions and begin with the buttons!

This blog post is part of a series. You can read the next part about the resolutions stack page here or the previous part here.