Well, this really is the last week of my Summer of Code! This will be a short update on the final changes made since my last update on Friday, which will be followed by a proper blog post for my final submission later this week.

Last week I mentioned a few items that were work-in-progress. The search field for the button mapping dialog has been merged, including its revamp of the dialog’s UI. The resolutions stack page now highlights the active resolution within the list, and, most importantly, Piper can now be translated completely into your native language! Here’s Piper fully translated in Dutch:

I also reported on the work that was still to be done, which we’ll get to now.

Libratbag returns error codes to clients over DBus, it can for example return RATBAG_ERROR_CAPABILITY that has a value of -1001 (a random number so as to not conflict with errno) to indicate that a requested change is beyond a device’s capabilities.

The bindings check for these error codes, and in case one other than RATBAG_SUCCESS is returned it will raise the appropriate exception:

There’s nothing wrong with this approach and it does in fact work fine. The problem occurs when the _dbus_call method is used within a GObject.Property setter method, because the GObject.Property decorator doesn’t raise exceptions.

This means that the exceptions raised from _dbus_call have to be caught within these setter methods and cannot be left up to the clients to resolve. The only way out of this then would be to return values from the setters, but then we might as well directly return the libratbag error codes instead of raising exceptions. Not only is that the wrong approach, it would also require all usage of any setter method to check for return codes. Even if we wanted this, the GObject.Property decorator doesn’t allow you to return any values, either. An alternative would be to set a sensible value upon error, or simply do nothing at all. As you can see, neither solution is, well, a solution.

The only sane alternative is to do away with using _dbus_call from within setter methods. After a quick inspection, there were only four such methods (one of which will be removed in due time), all of which were using _dbus_call to set a read-only DBus property. There is no reason whatsoever that these properties should be read-only with a setter method (in fact, we actively refactored the DBus interface to remove such inconsistencies), so I made these properties read-write and removed the explicit setters. After this it was simply a matter updating the bindings accordingly, and voilà, issue solved. Oh, and the bindings' setter methods also don’t return values anymore, as this never worked in the first place because the GObject.Property always returns the set value.

Last week I mentioned an issue with correctly restoring the macro preview label upon cancel. There was another issue that I forgot to mention: the macro was displayed using its integer keycodes. For the latter issue, we could easily copy the KeyStroke::_update_macro method to ButtonsPage, but that results in unnecessary duplication. To solve this, I initially moved the _update_macro method to be a new property on RatbagdButton instead:

My mentor then rightfully pointed out that using a *_str method (in Python, at least) is an indication that you should be using a proper class instead. This was the catalyst to a large refactoring, where I removed the KeyStroke class and introduced a RatbagdMacro class in the bindings instead. This class' responsibility is to abstract macros instead of the KeyStroke class, that never really had a good place in the architecture to begin with: it abstracted macros, but was also responsible for processing key events (and thus has knowledge of both evdev and Gdk keycodes) and its lifetime was tied to that of a button mapping dialog.

Intead, we now have a RatbagdMacro to abstract over macros, needing to know only evdev keycodes. It uses __str__ to give a string representation of the macro it represents, and is not tied to the lifetime of the button dialog nor does it process key events. Processing key events is now done entirely in ButtonDialog, which is now responsible for mapping Gdk keycodes to their evdev counterparts (see part 9), checking key validity and instantiating a new RatbagdMacro for every capture-phase, correctly restoring the macro preview labels upon cancel. I’m sure that all of this is much better explained by the actual diff.

After this refactoring, actually displaying the macros in the buttons stack page was extremely straightforward. I also removed the checking for modifiers for Enter and Escape, as for example pressing Enter with NumLock wouldn’t accept a macro. Finally, you can now press the Apply button directly from capturing a macro in order to apply it.

An issue with the way that macros were printed in Piper could lead to the following, obviously unwanted, situation:

We therefore automatically break the line after 30 characters, resulting in a much better behavior: 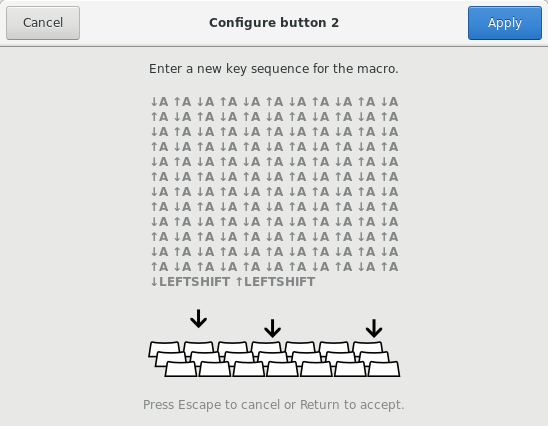 We made the same change for the preview label inside the button mapping dialog’s list and the buttons displayed in the configuration stack pages. We also removed the KEY_ prefix in front of every key, and we use ↓, ↑ and ↕ to denote a key press, a key release and a key press immediately followed by an identical key release, respectively.

With these changes, the programming part of my Summer of Code is now over. In the next few days I’ll publish a final blog post that will form my final submission, and with that I’ll officially finish Google Summer of Code. Until then!

This blog post is part of a series. You can read the last part about the code submission here or the previous part about saving the planet here.